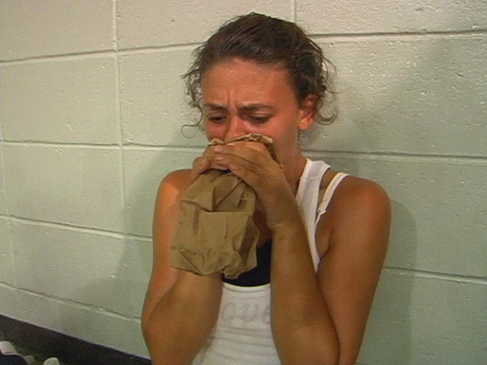 Most people think that they can escape anxiety attacks by resorting to substance abuse. As an emotional state, an anxious person is caught in the web of feeling dread, apprehension, or fear.

Although drugs, alcohol and other addictive substances can ease out anxiety temporarily, a person who develops addiction to these substances will somehow increase his or her chances of experiencing anxiety again, because of withdrawal syndromes associated with any drugs.

This means that when you are deprived of the addictive substance, your anxiety will be magnified as it is accompanied by sleep disorders, restlessness, intense perspiration and cognitive impairment.

This combination of euphoria and decreased anxiety and, in some cases, alterations in perception, such as the changes produced by marijuana or LSD (lysergic acid diethylamide), constitutes the “high” that most drug abusers seek.

One acute effect of drugs is to alter judgment during intoxication, thus the feeling of “escape” from anxiety. However, unless these alterations lead to a serious accident, produce a fatal overdose, or directly damage body tissue, the effects of the brain changes that intoxication produces are temporary and reversible. Thus, intoxication represents a short-term alteration in brain function, not a long-term change in brain structure.

The short-term, temporary effects of drugs on feelings, perceptions, cognition, and behavior occur because drugs cause changes in synaptic transmission. A good way to think about these effects is to consider the drug as if it were a neurotransmitter. Like neurotransmitters, drugs can cause effects only while they are present in the synapse.

Also, like neurotransmitters, the length of time a drug acts depends on how quickly the brain can remove it from the synapse. As long as people use drugs only intermittently and infrequently, the drugs do not directly produce lingering or cumulative effects. Only when people start to use drugs more frequently does this situation change.

Of course, we all know that drugs can be addicting. Anxious or not, you will be eventually be helpless from that “invisible force” that pushes you to seek more of that substance and leading you to the brink of addiction.

When a person repeats drug use frequently, changes in brain function, in addition to those that cause intoxication, begin to appear.

What’s worse is that these changes no longer disappear as soon as the body eliminates the drug. This shift in the brain’s response is caused by the way its individual neurons adapt to the frequent presence of drugs that induce persistent changes in the way neurons communicate.

This is why, during withdrawal, drug addicts have a difficult time in kicking the habit. Some drugs, including stimulants such as cocaine, can elicit a response that is just the opposite of tolerance. This response is called sensitization. That is, after using a drug repeatedly for a relatively short while, subsequent use causes an increased response, not the decreased response that results from tolerance.

This is especially true for the anxiety-provoking and motor-activating effects of stimulants. Some people discover that they just get more and more anxious and restless every time they use cocaine. This happens even if they do not increase their dose. These people have become sensitized to these effects, and continued drug use can lead to periods of severe anxiety. In this regard, drugs could never relieve you of anxiety. If they can, this is just ephemeral and the long-term effects could have more devastating effects on your body.